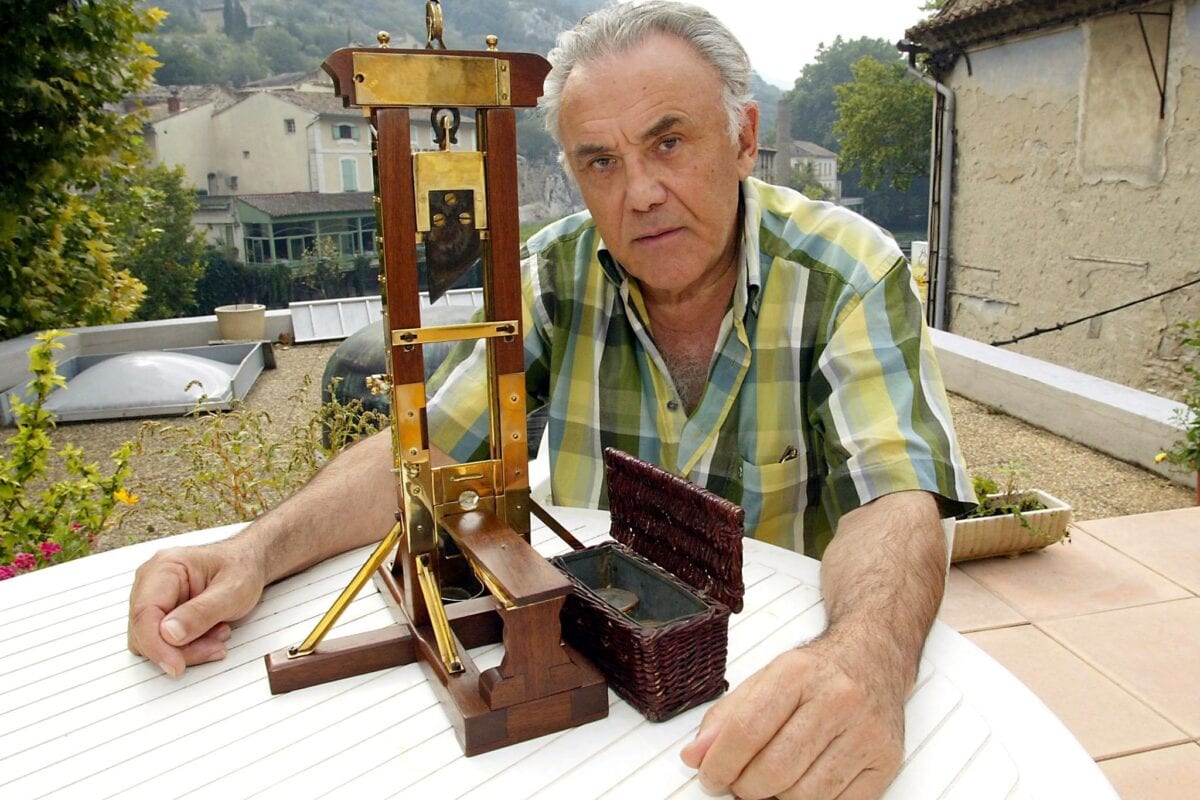 Fernand Meyssonnier was the last official French executioner in charge of beheading Algerians using a guillotine. He served in that capacity from 1947 to 1958, during which time he claims to have decapitated 200 Algerians. It was none other than the then socialist Justice Minister François Mitterrand who ordered the execution of 45 of them. Meyssonnier's father, Maurice, was a communist and a bar owner; he was chief executioner in Algiers after World War Two. His godfather was Henri Roch, chief executioner before the war, and from a long line of executioners stretching back to the 16th Century. In France, seemingly, this was considered a noble profession.

Meyssonnier left Algeria after independence and settled in Tahiti, yet another French colony, where he opened a bar, a second profession that he picked up from his father. He returned to France in 1992, having made a fortune, and opened a Museum of Justice and Punishment in the Provencal village of Fontaine-de-Vaucluse, where he retired. He published a book titled Paroles de bourreau: témoignage unique d'un exécuteur des arrêts criminels ("Words of an Executioner: A Rare Testimony of an executor of criminal verdicts"), to tell his story. He claimed that he had "no sympathy" for his victims, who he said were all guilty of hideous crimes, but he added that the true Algerian nationalists were the ones who showed most courage at the end. He died in 2008.

France's love affair with decapitating people was not only evident in colonial Algeria but also in its other colonies. Anti-colonial resistance erupted in New Caledonia in 1878, which the French had colonised in 1854 and began to fill with colonial settlers (especially the surviving and exiled communards). The government in Paris imprisoned the native Kanak population in reservations and gave their lands to the settlers. The anti-colonial native Kanak revolt ensued, led by the native Great Chief Ataï. The French colonial administration, the settlers and a few native collaborators, crushed the revolt and beheaded Chief Ataï and two of his sons. The decapitated heads were preserved in formaldehyde by the French anthropological society and later put on display in the Museum of Natural History. The French described the Kanak resistance to the theft of their lands as a "savage uprising against civilisation." In 2014, after 135 years, the French government finally returned Ataï's head to New Caledonia.

Born in Tunisia in 1949 when the country was still a French settler-colony, Hamida Djandoubi emigrated and went to France in 1968 where he became an agricultural worker. He lived in Marseille at first, in the house of a French couple, former settlers in Tunisia before independence. In 1971, at the age of 22, as a result of his employer's negligence his tractor flipped over and he lost his right leg from the knee down. He was never the same afterwards. Djandoubi's mental state became unstable; he was unrecognisable to his friends, and never recovered from his physical and psychological trauma. In 1974 he kidnapped, tortured and killed his white French girlfriend, whom he had met at the hospital after his leg was amputated; the three psychiatrists who examined him for the court concluded that the amputation was registered by Djandoubi as castration. Despite his defence lawyer's plea of insanity, the judge condemned him to death by decapitation. Djandoubi was the last person to be decapitated by guillotine in France, in September 1977. At the time, the then Prime Minister Jacques Chirac supported the death penalty.

During the same week that Djandoubi was on trial, Jean-Baptiste Dorkel, a white Frenchman with an amputated arm, was tried for the murder of a woman and the attempted murder of three others. Much sympathy was shown to him by the public. Unlike the non-white Djandoubi, Dorkel was sentenced to 18 years in prison.

French racism and demonstrations of white supremacy, however, did not end with the reign of terror in their colonies and the decapitation of colonised people within France and overseas, but has continued without respite. The recent expression of shock and horror by Interior Minister Gérard Darmanin that French supermarkets carry Halal food is hardly out of step with official state racism and that of the dominant society. Straddling the political spectrum from the extreme right to the extreme left, it has never abated. For example, Chirac's 1991 racist outburst, in which he wondered how a hard-working white French worker could tolerate the "smell and noise" of lazy Arab and African immigrants, drew much applause from his white audience, and the full endorsement of the leader of the racist, right-wing National Front, Jean-Marie Le Pen. We should not expect a less intense racist reaction to similar statements today.

The recent grisly beheading of a French teacher by an 18-year old Chechen immigrant to France, apparently because the victim upheld official French secularism and officially-condoned anti-Muslim racism, horrified the French public, white and non-white, Christians, Muslims and those of no faith, as it has horrified people around the world. However, the response from President Emmanuel Macron and French white supremacists to the crime has been just as horrifying as far as France's six-million Muslim citizens are concerned, as it is to most people outside of insular, white France.

To this we can add the fact that, since 2014, the French imperialist campaign allegedly targeting Islamists in the African Sahel region has killed hundreds of Muslims. In essence this is a campaign to protect French commercial interests in uranium mines in Niger as well as French-backed local dictators against their political opponents. It is ongoing with about 5,000 French troops deployed there. Macron's response to accusations of French atrocities in the region was to accuse Russia of an anti-French "campaign of disinformation".

Not only has the official response to the appalling murder of the teacher expanded France's extant official Islamophobia (the closure of mosques has been one of the many measures taken), but this white-supremacist response also includes Interior Minister Darmanin's moves to close down the organisation that monitors French Islamophobia, the Collectif contre l'islamophobie en France (CCIF). Thus, Islamophobic acts and crimes will continue to be committed by the French government and the white supremacist French public, but no French organisation will or can be allowed to record and register these grave violations of the rights of France's Muslim citizens.

READ: Algerians call for president to take a stand against Macron

Macron has recently insisted that French Muslims must give up their ways to be true French citizens. He proposed a law to create a new "French Islam" to combat what he termed Muslim "separatism". This is a typically racist, Christian-centric and laic — in short, French — response to the non-Christian communities in the country. It should be remembered that, in 1806, Napoleon Bonaparte convened an assembly of Jewish notables and interrogated them about their religious beliefs and traditions — including polygamy, divorce and intermarriage with Christians — to ensure that they could become citizens equal to French Christians. He demanded that Jews denounce their own traditions and cross-examined them based on his perception of alleged Jewish separatism and national disloyalty, in order to assess whether they would be loyal French citizens and if they would defend France and obey its laws.

The Jewish notables formed a council and assured Napoleon in their response that Jewish life and Judaism are fully compatible with French values, as all aspects of Judaism and Jewish life that would be incompatible had already been purged from the community, including polygamy. They also emphasised that a Jew "is required to consider the land of his birth or adoption as his fatherland, and shall love and defend it when called upon."

This submission to Napoleon did not save French Jews from ongoing anti-Semitism that continued through the Dreyfus Affair at the end of the 19th century and the Vichy government during World War Two, let alone from the ongoing anti-Semitism of today's racist right wing in France. The point is that even had Dreyfus been guilty, which of course he was not, French anti-Semites blamed all Jews for his alleged treason.

Today, Macron wants to de-Islamicise French Muslims, just as Napoleon insisted on de-Judaising French Jews, as a condition for their citizenship or to criminalise them and have the state and French racists hound them. The knife attack on two Muslim women in Paris a few days ago is but one example of what the French racists are capable of. Blaming all French Muslims and Islam itself for the teacher's beheading is itself the height of official French Islamophobia.

Would it then be fair, in light of the French government's reign of terror against its Muslim citizens, to blame every French person for the horror of what their country visited upon its non-white subjects from the 18th century onwards, including the decapitation of numerous brown and black people around the world? If the Chechen immigrant's horrific crime should remind us of anything, it is that decapitation is a quintessential French political tradition. The anti-Muslim racist campaign is more likely not an expression of the horror that the French feel about decapitation, but rather that the victim was a white Frenchman. White executioners have traditionally been France's only legitimate decapitators in the country's modern history. In that context, therefore, it is reasonable and not entirely flippant to suggest that, contrary to Macron's assertion that it was another Muslim act that sought "the destruction of the republic", the Chechen immigrant's horrific murder of Samuel Paty showed that there was at least one Muslim in France who was assimilated fully into the Republic's bloody culture.

READ: Algeria-Morocco competition exposes the closed shop nature of influence within the AU