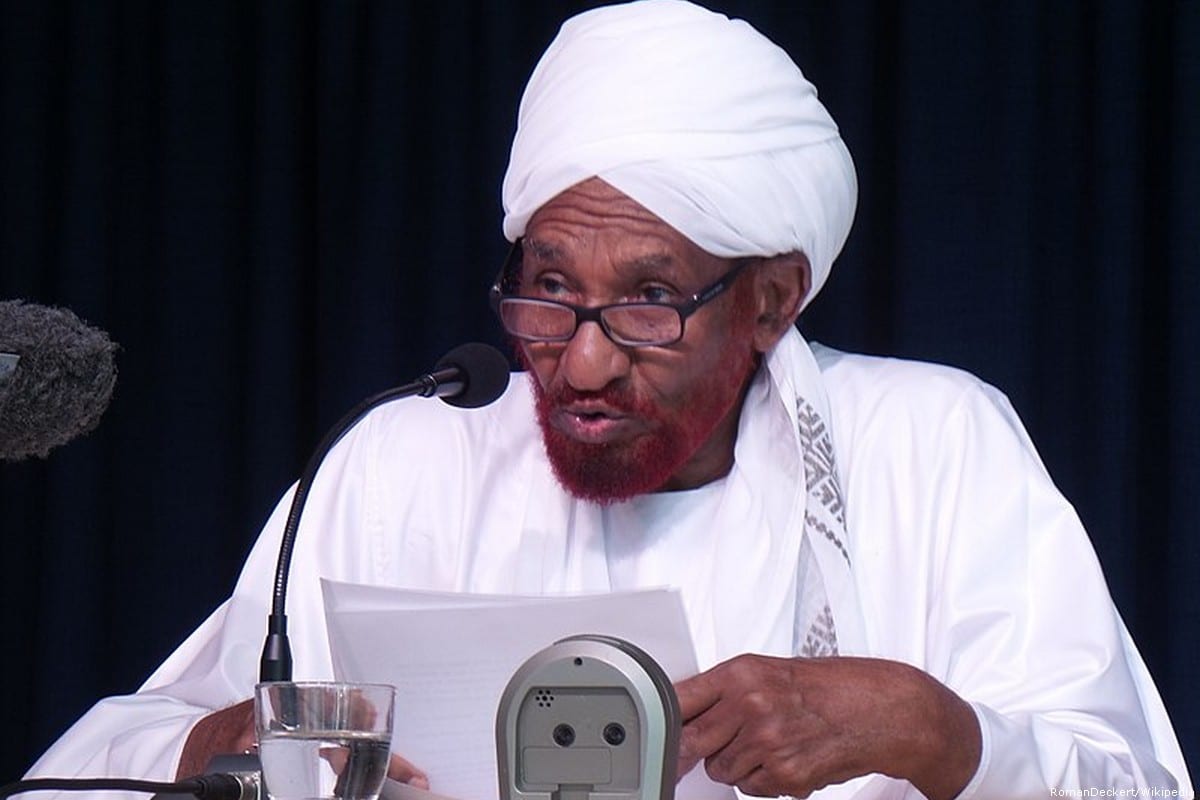 Former Sudanese Prime Minister and leader of the National Umma Party [RomanDeckert/Wikipedia]
September 2, 2019 at 5:16 am

The National Umma Party, headed by Sadiq Al-Mahdi, criticised the method through which names of transitional ministers have been nominated by the Forces of the Declaration of Freedom and Change, claiming that the nominations showed a lack of compliance with the agreed-upon criteria in the selection of candidates.

"We would like to express our regret over the violations made against the agreed-upon method and basics as the nominations submitted to the Prime Minister by the Nominations Committee are a repetition of the same previous method that does not comply with the agreed-upon criteria in the selection of candidates," said the National Umma Party in a statement.

It further said that "what has happened expresses a partisan quotation without giving any consideration to the meanings of diversity, positive differentiation, and balanced representation of the regions required by the necessities of the stage of making comprehensive and sustainable peace and facing the challenges of the stage."

"Assessment showed some of the candidates with the required basic qualifications and experiences for the occupation of the positions. All these remarks, and others, which were covered by the notions of struggle and revolution which we cherish, have led to making these nominations in a way that does not meet the Sudanese people's longings, ambitions and aspirations," added the Sudanese party.

Sudan's PM: 'I agreed with Forces of Change to review lists of ministerial candidates'

The National Umma Party leader Sadiq Al-Mahdi had earlier announced his party's rejection of any quotas with their fellows in the Forces of Freedom and Change on the formation of the Council of Ministers.

"Some of our fellows are looking forward to a quota in the formation of the Council of Ministers. This is unacceptable. We promised the Prime Minister that he is free to choose his ministers and hold them accountable," Al-Mahdi added.

The Forces of Freedom and Change have excluded some names from its final list of candidates for the ministries of the transitional government in Sudan, headed by Abdalla Hamdok.

Sudan's PM: 'I agreed with Forces of Change to review lists of ministerial candidates'

Hamdok's Political Office said on Friday that an agreement was made between the Forces of the Declaration of Freedom and Change and the Prime Minister, to review the lists of candidates and candidates for ministerial posts and specialised councils, according to a specific timetable.

A leader in the Forces of Freedom and Change said in statements to Sky News Arabia that the announcement of the formation of the government could be postponed for the next Tuesday.

Last Wednesday, the names of ministers were supposed to be announced, after the Forces of Freedom and Change submitted a list of 65 candidates for 14 ministries and five ministerial councils.

Hamdok was sworn in a few days ago to head the interim government after the ousting of former President Omar Al-Bashir.