The League of Shame, part 1 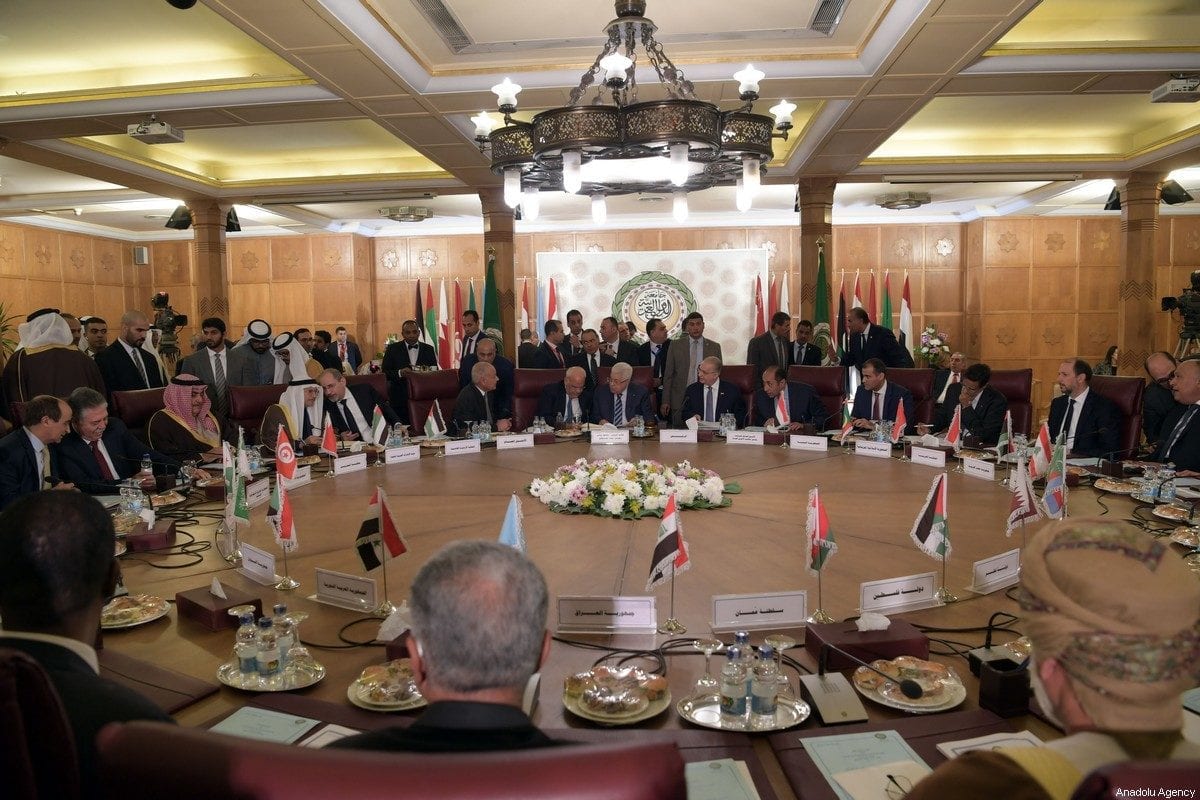 I did not expect a courageous response from the so-called Arab league regarding the UAE-Israel normalisation agreement, because the dead cannot talk, and the Arab League is basically dead and buried after rejecting the draft Palestinian resolution to condemn the deal. It did so despite the fact that such normalisation is a departure from the resolutions of Arab and Islamic summits and the peace initiative that the organisation itself adopted at the 2002 Beirut summit.

This League of Shame wrote its own obituary in the form of an ambiguous statement in which it tried to save face and claim that it was committed to the Arab Peace Initiative, which links normalisation with Israel to the complete end of the Zionist state's occupation, a commitment to the two-state solution and the principle of land for peace. It made no mention of those who normalised before the occupation was over, thus spouting nonsense that even a child wouldn't believe and underestimating the Arab masses who reject normalisation by trying to appease them with a meaningless statement. This encouraged Bahrain to follow in the UAE's footsteps and announce its own normalisation of relations with Israel, the establishment of complete diplomatic relations and the opening of embassies.

It is idiotic for us to think that the League of Shame would condemn the UAE. How could it do so when the UAE and Saudi Arabia control the organisation and are deeply in love with Israel? Riyadh will, no doubt, make its engagement public soon enough, but in the meantime has opted to sleep in the Israeli bed behind closed curtains to hide its dirty deed. It has already sold Palestine and even the entire Arab nation and its Islamic heritage just to gain kudos in Tel Aviv and Washington.

Israeli Prime Minister Benjamin Netanyahu was right when he said that, "Something very big is happening: the transformation of Israel in the minds of many in the Middle East. It's no longer being perceived as an enemy. We've become an indispensable ally against the enemy of militant Islam." He noted that the only problem lies with those which we might call the independent Arab nations. The Zionist Arab governments have given the Israelis more than they could ever dream of, but thankfully, the free Arab nations stand as a wall against their forbidden dreams. These will turn into nightmares and haunt them, as the Arab masses still have a beating heart and strong men to resist this usurper occupation and liberate Palestine. Israel fears these strong men, not only in Gaza and Jerusalem, but across the Arab world. This is why it fought the Arab Spring revolutions and used the conspiracy state, the UAE, as its base from which to control the counterrevolution, with funding from the Saudis and the Emiratis themselves.

When the 25 January Revolution broke out in Egypt, and sovereignty was back in the hands of the people, the Israeli Embassy in Cairo was besieged, its flag was lowered and it was forced to close; its staff had to leave the country. A young man climbed to the nineteenth floor of the tower block overlooking the River Nile where the embassy is located, and removed the Israeli flag amid cheering and applause from the crowd that gathered below. This astonished the world and worried the Israelis. The young man was given an apartment to get married and settle in by the governor of his city. Meanwhile, the young man who raised the Palestinian flag in Cairo Stadium during the Egypt-South Africa football match last year was arrested and imprisoned. 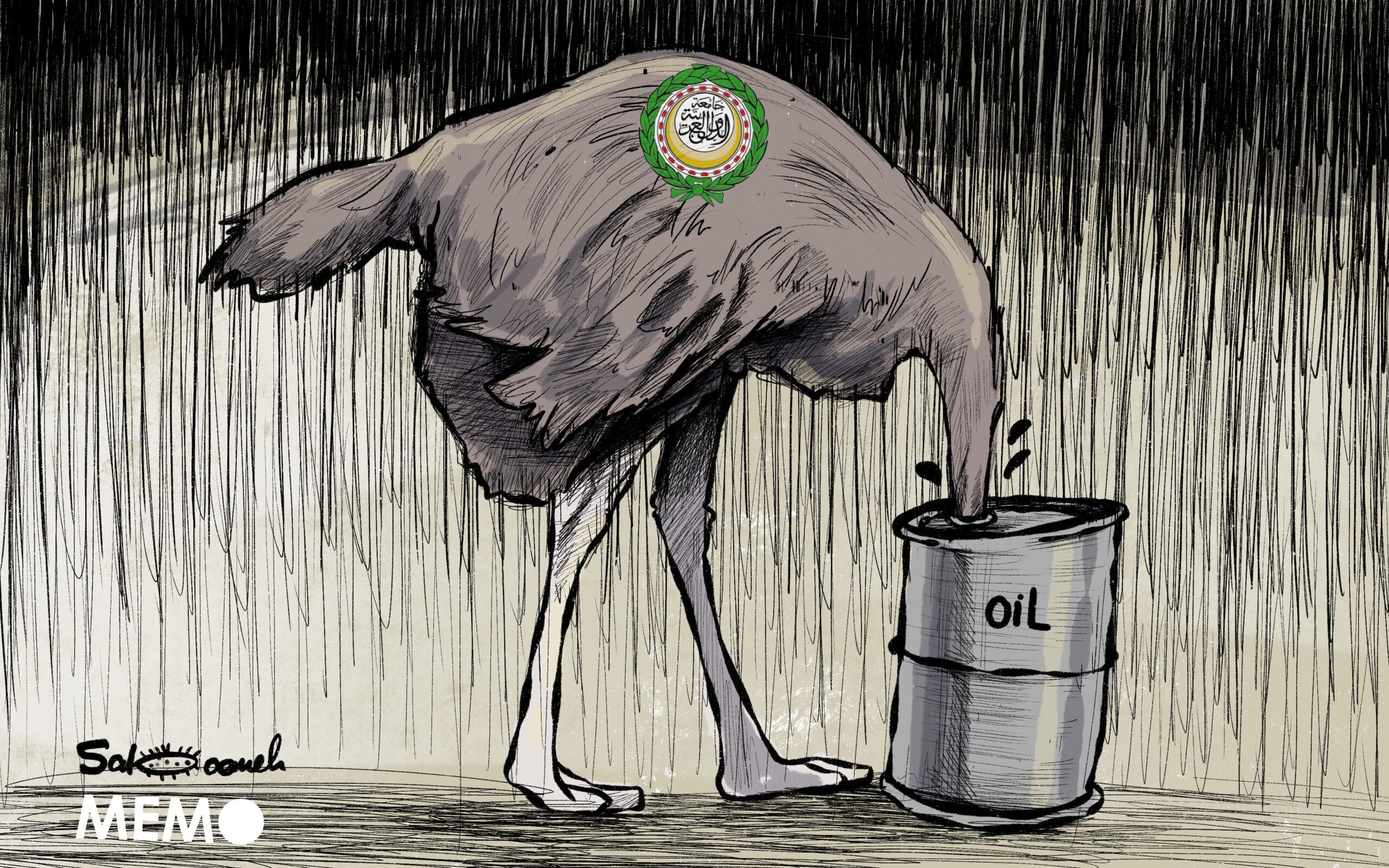 Five years after the coup that ended the revolution in Egypt, Israel celebrated its so-called Independence Day — the anniversary of its occupation of Palestine — in a hotel just a few metres away from the Arab League headquarters directly overlooking Tahrir Square, the symbol of the January Revolution. Unfortunately, it was attended by political, diplomatic, cultural and media figures, as well as businessmen.

There is no doubt that there have been great changes in recent years since the aborting of the Arab Spring revolutions, with the emergence of the Arab-Zionist axis with US cover, represented by Saudi Arabia and the Emirates, as well as those following their lead. They are setting the current Arab political agenda in the absence of any real opposition which sticks to the Arab constants. The rest of the Arab governments that were supposed to form an opposition axis are preoccupied with struggles against their own people. As such, we shouldn't be too surprised when the League of Shame, led by the Emirati axis, tears up the Arab Peace Initiative and announces general normalisation with the Israeli occupation.

We cannot be rule this out. The dominant axis leading the Arab League no longer views Israel as an enemy, as Gamal Abdel Nasser viewed it in the 1950s and 60s when Egypt was leading the organisation and issuing the Three Nos: no reconciliation, no recognition and no negotiation.

READ: Amnesty International says no peace without justice for Palestinians

The UAE axis has changed the Arab League's compass. It is no longer pointing at the nation's historical enemy, which has become a friend and ally, but at Turkey, which has become the enemy that must be fought everywhere. While the Arab League rejected the draft Palestinian resolution, it decided to form a permanent sub-committee to monitor Turkish "aggression". It was tasked with presenting a report about this in each subsequent meeting. Meanwhile, the foreign ministers of this axis compete to attack Turkey and exaggerate its threat to so-called Arab national security. The first act in the "Turkish scarecrow festival" was performed by the Emirati Foreign Minister, Anwar Gargash, who accused Turkey of threatening the security and safety of maritime traffic in the Mediterranean by flagrantly violating the laws and charters of concerned states and violating their sovereignty. He also accused Turkey of interfering in the internal affairs of Arab countries.

Next up was Egyptian Foreign Minister, Sameh Shoukry, who said: "Turkey's practices and interference in multiple Arab countries' internal affairs shape threats against Arab national security… Egypt will not stand idly by in the face of Turkish ambitions that are manifesting in northern Iraq, Syria and Libya in particular."

This confirms what I have said before: the UAE-Israel normalisation is nothing but a strategic alliance, and the nucleus of a larger alliance that includes many Arab countries, to form a "Zionist Arab NATO" with US-EU cover, directed against Turkey.

In effect, it is an unspoken declaration of war on Turkey, which found itself in mandatory opposition to all of them; its only fault is that it is an independent sovereign state which owns its decisions, unlike the Arab states, who bow down to Zionist powers. Turkey has a strong army that is self-sufficient in arms and munitions; has been able to build a strong economy; and is self-reliant in modern technology to maximise the benefits of the discovery of natural gas in the Black Sea. The Arab countries, meanwhile, depend on US, British, Canadian and Italian companies, and only get the crumbs from their masters as they exploit Arab gas fields.

Turkey's greatest "crime" can be laid firmly at the door of President Recep Tayyeb Erdogan personally: the simple fact is that the Arab masses look up to Turkey as their hope for the restoration of the Muslim Ummah, and as a model to be adopted. The people love Erdogan almost as much as they hate their own leaders, because they see a strong leader who has restored some of the Ummah's dignity. As far as the UAE Ambassador in Washington is concerned, this is an unforgivable sin. Yousef Al-Otaiba expressed as much in his recent article in in Israel's Hebrew-language Yedioth Ahranoth, in which he noted the need to stand against what he called "Islamic expansion".

Part two of The League of Shame will follow.