So what did happen during that terrorist attack in Vienna? Osama Joda explains all 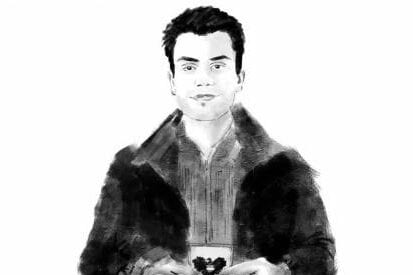 The Austrian capital, Vienna, is recovering slowly from the trauma of the deadly gun attack near a synagogue on Monday 2 November by a gunman of Macedonian origin. Kujtim Fejzulai shot and killed four people and wounded 23 others. Police officers killed the attacker at the scene.

It was made clear soon afterwards, though, that a young Palestinian Muslim from the Gaza Strip was instrumental in helping to save the life of a police officer who was wounded during the attack. Osama Joda, 23, settled in Austria with his family seven years ago. He explained to MEMO what happened on that fateful night when I asked him for the details.

"When the incident happened, my colleague and I were taking goods to the restaurant where we work, and were in the car park when we heard two shots. I saw the terrorist about 30 metres from me. He started shooting at us. We took cover — I was behind a tree — but he kept on shooting."

Joda tried speaking to the gunman in Arabic, in the hope that he would understand. "I tried to persuade him to stop shooting and told him that I am from Palestine, a Muslim, and that shooting people is wrong. He didn't pay any attention and kept firing straight at me."

At that moment, he recalled, a police car passed with two policemen inside. "The terrorist hid and when the armed officers got out of the car and came towards me to get to him he shot one of them in the foot. The wounded man was close by, perhaps just five metres away."

The young Palestinian told the other policeman to give him cover while he dragged his wounded colleague to safety. "At first he refused; he just told me to get away from the scene as it was so dangerous. I insisted, though, and so he gave me a bulletproof vest. I put it on and went straight to the wounded officer and dragged him to safety."

Joda tried to stop the bleeding but couldn't do it. "I was concerned about him, and didn't want him to lose consciousness as he was losing a lot of blood, so I removed my jacket and then my t-shirt, which I used to tie on his foot as a makeshift bandage. This stopped the bleeding."

By then, there were ambulances on the scene, about 60 metres from Joda and the wounded police officer. "I went to ask them for help, but they were too scared to do anything."

By that time the terrorist was about 200 metres away, so Joda asked the policeman to cover him again so that he could take the injured officer to the ambulance. "Suddenly, two young Turkish men arrived and helped me to get the casualty to the ambulance. I stayed with him to explain to the paramedic what had happened".

Afterwards, Joda was interrogated by the police and internal security agents for five hours to find out exactly what did happen. "Then they celebrated with me and gave me a gold police badge in honour of what I did. They expressed their gratitude and called me a hero."

What prompted this young man to risk his life under fire to save the policeman? It was, he told me, his sense of common humanity. "Moreover, I am against terrorism and against these criminal acts. Even if the perpetrator was a Muslim, and no matter who the target was — a Muslim, Jew, Christian or whatever — I would try to save the victim, not help the criminal."

Joda's background also helped. "I am a Palestinian Muslim. I was born and raised in the Gaza Strip and I saw many painful things there. The experience in the Strip taught me that it is my duty to defend anyone who is oppressed, because my Islam teaches me not to distinguish between race, religion and ethnicity when it is time to do what is right. Muslims are not terrorists simply because they are Muslims; when any Muslim, Christian, Jew or whatever does something wrong, he does not represent anyone but himself."

He was keen to point out that as Muslims, his family and, indeed, all Muslims in Austria in particular, and Europe and the world in general, are not in favour of terrorism. Most victims of terrorism around the world are, after all, Muslims. "We are against it and we are fighting it as well, because Islam and terrorism cannot go together, whatever happens."

How, I asked, did he feel after this incident? "I was in a state of shock; I'm still in shock, as you might be able to tell from my speech. What happened was not easy. I was in the middle of what could be described as a battlefield in every sense of the word. However, I also felt proud of myself and my family, and also my Islam, for doing something so good. More than everything, I suddenly felt very tired. I just wanted to sleep."

So sleep he did, and when he woke up he was inundated with messages from local people he knows and many who he doesn't know. "This was a surprise. They all told me how proud they were for what I did, and all called me a hero. I was also honoured by the Palestinian ambassador to Austria."

He was actually awarded a medal by Palestinian President Mahmoud Abbas. Our hero was, however, rather shy. "I did not want to appear in the media, because I did what I did for humanitarian reasons, not for 'fame and glory'. It was my father and my family who insisted that I speak to the media in order to help to defend Islam and Muslims in the face of the fierce attack we are facing in Europe." 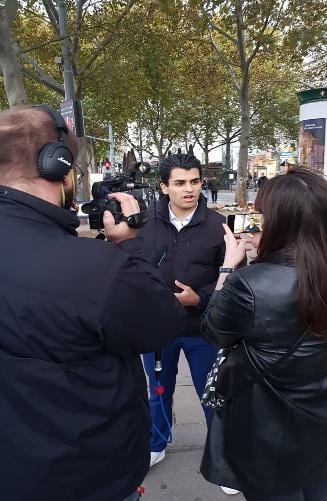 Joda speaking to the media after the incident (Special Archive)

Was there any change in attitude towards Islam and Muslims after what Joda did? "We as Muslims, have to face a lot of racism across Europe and in Austria, and the general view of Muslims is bad. All of this is systematic from the parties that fight Islam in Europe. We saw that even when the full details of the attack in Vienna were not known, Austrian Prime Minister Sebastian Kurz described it as an 'Islamic terrorist attack', but when things unfolded in the morning and after my appearance in the media, and the appearance of the two Turkish youths on the Turkish and Austrian media, an advisor to the Prime Minister went out and said that [the Austrians] and Muslims are in one trench against terrorism. You can read a tremendous change into that one statement alone."

Following his appearance on Austrian TV, the director and presenter in the studio told Joda that what he did left its mark on the war against Islam in Europe. "They explained to me how they, as media professionals, see this effect in various outlets, even on social media. Amazingly, after the incident, another Austrian TV station opened its news bulletin with a Qur'anic verse from Surat Al-Ma'idah: '…Whoever kills another person — unless it is in lawful retaliation for taking a life or for wreaking havoc throughout the land — it is as though he has killed the whole of humanity, and anyone who saves a life, it is as though he has saved the whole of humanity.' This illustrates perfectly that the Austrian MP who told parliament some time ago that, 'The Qur'an is more dangerous than Covid-19' was wrong."

There has to be a change in attitudes, obviously. "Change is essential," concluded Osama Joda, "so that incidents like this do not happen and, if they do, to ensure that all Muslims and Islam itself are not blamed."