Hamas reveals the hidden aspects of its relations with Saudi Arabia

Mohammed Nazzal, a member of the Hamas political bureau, revealed for the first time the details of the meeting between the movement's leaders and the Saudi Crown Prince Mohammed Bin Salman in 2015. He also revealed that the previous two Saudi monarchs donated millions of riyals to the movement, and that it continues its communications with Saudi Arabia to release dozens of its members detained since April 2019.

On 22 April, Nazzal, the movement's vice president abroad, revealed the details of a previous meeting that brought together the leaders of the movement, led by Khaled Meshaal, the former head of its political bureau and Bin Salman in April 2015. This meeting resulted in the release of the movement's leader in Saudi Arabia and its former financial manager, Maher Salah, after being arrested for several months for allegedly transferring money from the kingdom abroad.

Nazzal confirmed during an interview with Al-Sharq satellite channel, which is opposed to the Egyptian regime and airs from Turkey, that he had personally met with the late Saudi Crown Prince Sultan Bin Abdulaziz and Prince Turki Bin Faisal, former head of Saudi intelligence, without specifying a date.

A high-ranking source in the Hamas movement, who remained anonymous, told Middle East Monitor that: "The movement does not usually reveal the sources of the donations it receives, neither on the level of countries, organisations or individuals, and it is perhaps the first time that it discloses its sources, and identifies the names of those who have donated to it."

READ: Saudi activists accused of launching hashtag 'Palestine is not my cause'

He added that: "The recent disclosure of the movement's relationship with Saudi Arabia, whether in terms of its meetings with the political leaders in the kingdom or obtaining financial donations, is to be fair to the historical political leadership in Saudi Arabia, which was a major and constant supporter of the Palestinian cause and Hamas. It is also an expression of astonishment at the new position adopted by King Salman Bin Abdulaziz and his Crown Prince Mohammad Bin Salman regarding the Palestinian issue in general, and Hamas in particular, by mentioning the positions of their predecessors, who were providing political, moral and financial support to Hamas."

It is worth noting that the arrest of the first Hamas representative in Saudi Arabia, Dr Mohammad Al-Khodari, set a dangerous precedent in political, diplomatic and moral norms, and cannot be tolerated. Accusing him of belonging to a "terrorist" entity and providing financial support to it is quite ironic, as Al-Khodari was chosen to represent the movement in Saudi Arabia based on an understanding with Prince Turki Al-Faisal, the head of the General Intelligence Service at that time, and there is record of this since 1993. Al-Khodari remained in this role for over 15 years, collecting donations in sight of the official Saudi authorities, and has always coordinated with the head of the file in the General Intelligence Service, Major General Mohammed Saeed Al-Ghamdi.

It is clear that Hamas was forced to later gradually disclose some details of the relationship with Saudi Arabia, based on the injustice it is suffering and due to the known implications of the relationship with Hamas. What was revealed were only some, not all, of the donations made by Saudi leaders and they are considered a positive point in favour of the kingdom. It actually does justice to the country. 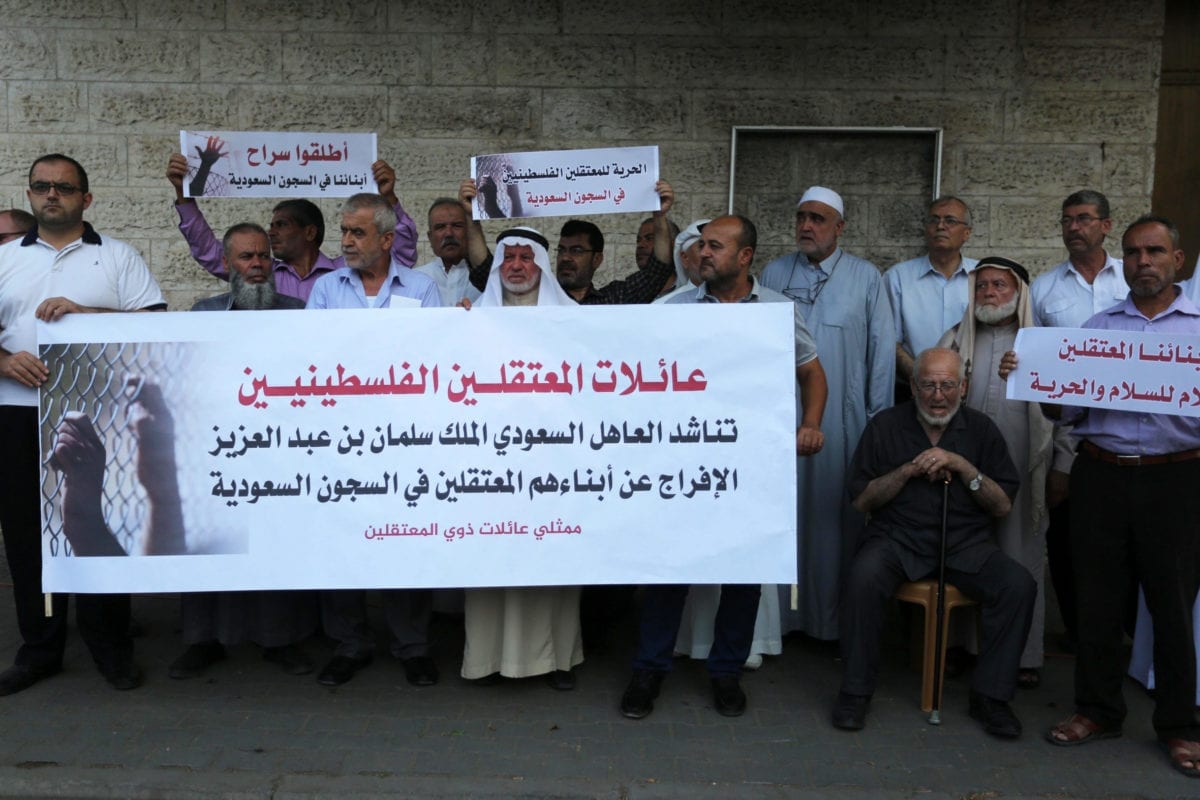 Palestinians take part in a protest in solidarity with prisoners in Saudi jails, in front of the Red cross office, in Gaza city on on 16 October 2019. [Ashraf Amra/Apaimages]

Middle East Monitor learned from senior members of Hamas that: "We can say with great confidence that there is nothing new in terms of mediation between the kingdom and Hamas, and that the resumption of the relationship does not require mediators, but rather requires political will from the Saudi side. This is because there is political will on Hamas's end and it has not stopped seeking the best form of relationship with Saudi Arabia, based on its understanding and awareness of the strategic importance of this relationship, both to the Palestinian issue and the Arab national security, of which Saudi Arabia is an integral part."

Prior to the current disagreement between Hamas and Saudi Arabia, the latter has always made room for fundraising for the movement in the country. Ever year during Ramadan, the movement's leaders visited the kingdom, hosted in an official capacity, and met with senior officials. However, the relationship between Saudi Arabia and Hamas has witnessed tension closer to estrangement after the arrest of Al-Khodari and 60 other supporters in March 2020, accused by the Saudi judiciary of belonging to a "terrorist" entity.

We could say that there are three reasons behind Nazzal's statements. The first of which is Hamas's attempt to pressure Saudi Arabia regarding the movement's detainees. The second, is that it is an occasion to remind the current Saudi regime of the historical relations that linked the movement to the kingdom in previous times, in order to contribute to the release of detainees, especially the elderly and leaders, even though the mediations to resolve the issue are still ongoing. The third reason, is the absence of any influential voice within the kingdom demanding their release.

READ: Palestine is the cause of the free

Before Nazzal's latest statements, Hamas's relationship with Saudi Arabia reached a qualitative level of tension after the initiative by Abdul-Malik Al-Houthi, the leader of the Houthis in Yemen, loyal to Iran, on 26 March, to release two Saudi pilots held in exchange for the release of Hamas detainees in the kingdom. Hamas welcomed the initiative, while Riyadh remained silent.

The movement confirms that its relations with Saudi Arabia have always proceeded in an official manner and that all its actions are legal in accordance with Saudi law. Hamas has not taken any action within Saudi Arabia that is not within a specific context to serve the Palestinian cause, and continues its contact with more than one party to secure the release of its detainees there. The movement also notes that Nazzal's statements were made to clarify facts, not to embarrass any party.

The relationship between Saudi Arabia and Hamas can be described as complex and witnesses ups and downs, despite reaching a difficult level of escalation after the kingdom's arrest of Hamas's cadres in 2019. It seems that Nazzal's revelation of new information regarding the kingdom's donations to the movement was preceded by the attempts of many parties to mediate and find a discreet solution to the issue of its prisoners and keenness not to reveal the crisis to the public. However, all initiatives and mediations were unsuccessful, which created frustration with Hamas, prompting it to disclose the information that it did.

There is no doubt that Saudi Arabia's relationship with Hamas is defined as historical and solid, but the latest stage of these relations witnessed tension, reaching the point of estrangement and describing the movement as a terrorist organisation. This may be due to the US-Israeli positions hostile to Hamas, but because Saudi Arabia is a central state in the region, and Hamas is an active element within it, this requires the kingdom to be open to all Palestinian components. This will help it implement its strategy to expand its influence in the region. As for the Saudi falling-out with Hamas, it does not serve its foreign policy.

Nazzal's statements can also be interpreted as an expression of closing the doors with Saudi Arabia, and confining the problem with Hamas's relationship with the current regime represented by King Salman and his crown prince, Mohammed, and not with the kingdom in general. In doing so, the crisis is contained with a specific party inside the kingdom, and not with them all.

The motives behind Nazzal's statements, on which a Saudi comment was not issued, lie in the fact that they are a response to Riyadh's rejection of any mediation the movement sends to release its detainees, which made it praise the former Saudi kings, and criticises the policy of the current king and his son, the crown prince. The frustrated statements from the kingdom may complicate the crisis between the two sides, not resolve it, given the policy of stubbornness and inflexibility adopted by the current Saudi leadership towards the movement. 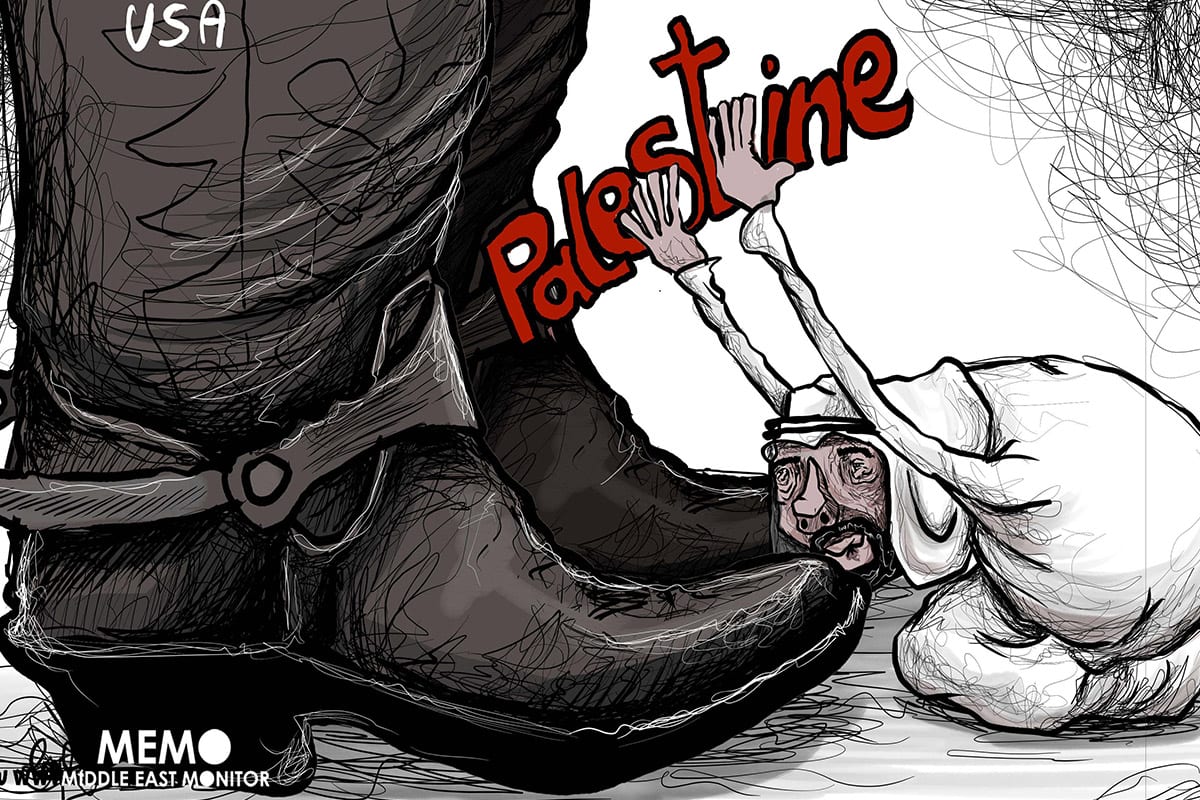 How hypocritical are the Arab leaders, selling Palestine out to the US – Cartoon [Sabaaneh/MiddleEastMonitor]